Bob Proudman poses for a picture with a single-bit ax. Earlier this day at the 2015 Southern Partnership Meeting, he received an engraved pick mattock, a retirement gift presented by Pete Irvine of the U.S. Forest Service (on left)//Photo courtesy Bob Proudman//Text by Susan Daniels, ATC’s conservation coordinator

Bob Proudman has been my supervisor, my colleague, and my friend since I came to work for the Appalachian Trail Conservancy (ATC) nearly 26 years ago.

My husband Bill and I moved to Harpers Ferry, West Virginia in the late ‘80s for the beauty of the area, its history, and its hiking, cycling, and canoeing opportunities. Hiking in Maryland one day, we came across Potomac Appalachian Trail Club (PATC) volunteers, armed with loppers and saws and other implements, working on a short relocation. A revelation! The Appalachian Trail (A.T.) wasn’t just an old path that was kept passable by hikers tramping on it—it was actively built and maintained by volunteers. We signed on to help.

A couple of years later, as mother of a 9-month-old baby, I was looking for an alternative to spending three hours a day commuting via train and Metro from Harpers Ferry to a job in Bethesda, Maryland. I spotted an ad for a secretarial position at the ATC’s headquarters in Harpers Ferry. Working for a national scenic trail organization with a two-block commute sounded ideal. I interviewed with Bob and other staff members and took the job when it was offered. 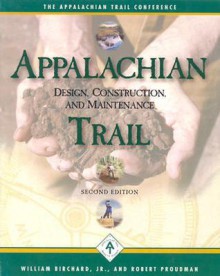 I learned that Bob had literally written the book of standards for the A.T.—Appalachian Trail Design, Construction, and Maintenance—and other trail manuals. I learned that managing a “simple footpath” as it winds through 14 states and numerous federal, state, and local jurisdictions is not simple. Particularly in that first year, when the complexities sometimes seemed overwhelming, Bob’s empathy, gentle manner, and sense of humor made me feel welcome and part of a team. He is easy to talk to, always willing to listen and to provide support.

Managing and maintaining the A.T. requires the partnership and cooperation of many people—volunteers, federal, state, and local agency personnel, Trail neighbors, and the ATC. It requires cooperative agreements, policies, meetings, conference calls, and informal discussions. Bob worked closely with the NPS-Appalachian Trail Park Office, the U.S. Forest Service, Trail club leaders, and others partners to manage the Trail. He has always been a staunch supporter of the volunteers who work on and for the Trail.

Disagreements arise and achieving consensus can be difficult. Bob encouraged everyone to have their say, gently brought people back on track when things were bogged down, and could smooth tensions with an anecdote or self-deprecating humor. He believes in using the “bully pulpit” to encourage people to do what is best for the Trail.

Bob began his trail career at age 16, working on a pro trail crew for the Appalachian Mountain Club (AMC). He remains an active member and the secretary of the AMC Trail Crew Association, often spending vacation time at the crew’s cabin in New Hampshire and on canoeing adventures with other crew alumni.

He went on to become AMC’s first supervisor of trails, served on the ATC’s Board and worked for the National Park Service in the 1970s, and joined the ATC staff in 1981. Bob helped found numerous ATC programs that continue today, including trail crew, corridor monitoring, and ridgerunner and caretaker programs.

Bob worked on budgets and contracting, cooperative agreements, local management planning, incident management, advocacy, external threats (such as power lines and highways), backcountry sanitation, and on other problems and issues as they arose.

He is also a great story teller and can regale a group with tales of his travels, outdoor adventures, and Trail history. He loves to read, sing, and wield a chainsaw.

Bob’s good humor and easy-going manner, his dedication to the Trail, trail-building expertise, and willingness to share his knowledge have won him friends along the A.T., across the country, and even as far as Africa and Asia.

In 2006, he traveled to South Africa with a group from Conservation International to help lay out a trail in a region with diamond mines and a sensitive conservation area known as the Succulent Karoo, where rare succulent plants receive most of their moisture from sea fog.

In 2013, Bob was invited to give a keynote address at the Beijing Tourism Mountain Festival on the development of the national trail system in the United States, and particularly the A.T. That invitation came about after Bob met with a professor from China Cultural University who visited the ATC along with staff from the Taiwan Forestry Bureau in 2009. Even on a whirlwind trip of only six days, Bob was able to visit the Great Wall and Tiananmen Square and other historic places. 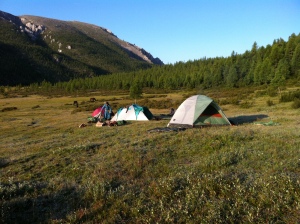 A year ago, Bob traveled to north-central Mongolia, helping to lay out a trail system in Lake Hovskol National Park. That adventure included sleeping in yurts and tents, bouncing across 500 miles on rough roads and rivers in an old van with no seat belts, and a week of travel by small Mongolian horses. The area was so remote that he said he did not hear an airplane or see a flush toilet for a month. Sleeping under the Milky Way with no city lights to dim the magnificent sky made up for any hardships.

His background as a mountaineer and an adventurer (known to some as “Bivouac Bob”), and ability to sleep anywhere and eat anything, were good preparation for those trips, which included an encounter with feral dogs in South Africa, 10-course meals in China, and breakfasts of roasted marmot and fermented mare’s milk in Mongolia, of which he said, “Tastes like buttermilk with vodka, only different.”

After 50 years of trail building and management, Bob retired from the ATC on July 19. He and I have been a great team, so close we can finish each other’s sentences. I am glad to report that Bob will continue to work on specific projects as a contractor for the ATC, including writing for The Register, which I edit, and working on the nomination of the Trail to the National Register for Historic Places.

I will miss you, Bob, as will all of us at the ATC. Safe travels, and bring us back some great stories!

Have you met Bob? Share a memory below, or wish him well in the comments.

Near the end of a thru-hike, or just afterwards, there’s a flood of mixed emotions: pride, elation, and for some, there’s confusion about what comes next. The camaraderie, present-moment focus, the healthy physical exertion, and time outdoors doesn’t have to conclude when your hike finishes.

Several thru-hikers of the Pacific Crest Trail and the Appalachian Trail (A.T.) are already planning to join the Rocky Top Trail Crew once their hike ends. Rocky Top Trail Crew enables hikers to experience the Great Smoky Mountains from a different perspective by working and camping on the Trail during 8-day sessions.

Here are the top 10 reasons why a hitch on crew is the perfect transition into life after the trail.

Convinced that you are a good fit for the Rocky Top Trail Crew? Access the crew schedule here and email Leanna at ljoyner@appalachiantrail.org with any questions.

Meet Kelly Perkins, former Membership & Development intern at the Appalachian Trail Conservancy (ATC). She’s also one of our newest Trail Guardians, better known as our monthly donors, and now she’s someone I look up to. You’re probably asking, “Max, so what?” Well hold your horses, I’m getting to it.

Kelly was connected with the Appalachian Trail (A.T.) for about three years prior to being an intern. She was part of the Appalachian State University Trail Crew which went out around the Boone, NC area and helped maintain local trails. The A.T. and her fellow volunteers had the most profound impact on her. Kelly said, “I was astounded at the passion these men and women had for maintaining the Trail.”

Kelly accomplished a lot during her time at the ATC as an intern, including analyzing the membership database. She spent her time interpreting information about members and the best ways to communicate with our supporters. Kelly’s work helped grow the ATC’s donor support.  Best of all, the experience she gained during the internship helped her go on to secure a full time position analyzing business data for a North Carolina logistics company following her graduation from Appalachian State University.

She wanted to give back to the Trail and the ATC, but how was she supposed to do this and balance her new job? Kelly set the bar high for us interns by becoming a monthly donor. Kelly said, “[Donating to the ATC] gave me an option of giving back to the Trail in a different way than physically maintaining it. My choice to donate really came from a snowball type series of events from working on the A.T. with Trail Crew, working on trails during my summer season working at Grandfather Mountain State Park and then being an intern at the ATC. Working at the Conservancy gave me the opportunity to learn more about an organization that focused on what I already enjoyed doing: hiking and just being outside.”

Why does this make Kelly someone I admire? Well, I’m currently in college and the thought of losing out on money allocated for ramen and cheap light beer is horrifying. I know I’m not alone in that fear. I also know that one day I’ll move beyond that phase of Red Bull and corn flakes for breakfast and I’ll find a career and hopefully settle down and start a family. I won’t be an unpaid intern forever.  That’s when I’ll be thinking about Kelly and her induction into the ranks of the ATC’s Trail Guardians. If she can find a way to give back through her monthly donations, I’ll be able to as well.

And that’s an intern aspiration. 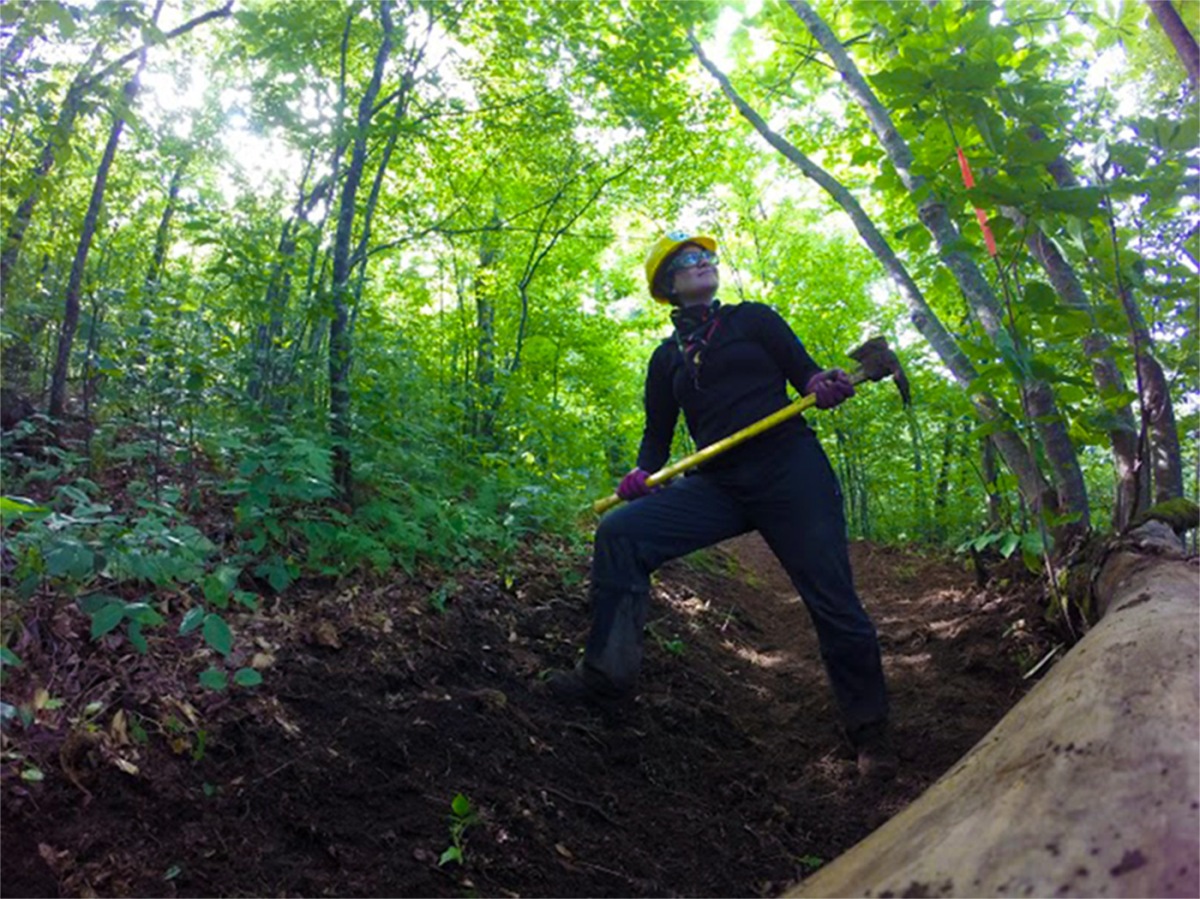 We get it. Whether it’s school, a full-time job, a family, or those little everyday life occurrences—you’re busy. But if you can spare a week and want to spend some time on the Appalachian Trail, we have a gig for you.

From late spring into the fall, six volunteer Trail Crews complete important trail construction and repair projects from Georgia to Maine. No previous experience is necessary! You just need to have a desire to work cooperatively, live in the backcountry for about a week or longer, and have a great time among friends. The work isn’t easy—it’s hard physical labor—but the satisfaction you’ll get from the experience will outweigh even those pesky mosquitoes.

Don’t just take our word for it, though. Read what Allegra T., who was the assistant crew leader for our S.W.E.A.T. Crew last year, had to say about her experience:

“Working for the Appalachian Trail Conservancy has revealed to me the hard work and dedication it takes to protect and preserve the Appalachian Trail. I’ve had a wonderful experience working with volunteers, and it brings me joy to see young and old people have a common love for the wilderness. It really is an awesome community. working with the S.W.E.A.T. crew has helped me grow into a stronger individual.  If you want to experience nature, and connect with the people and places of the A.T., the ATC will help, as well as benefit from, your efforts!”

Another great thing about joining the ATC’s Trail Crews? Besides satisfaction, we also provide your shelter, food, transportation to and from project sites, tools, safety equipment, and group camping gear.

Registration is now open for the 2015 season! Access the project calendar and more here.

See you on the Trail!

Curious about which Trail Crew would be a good fit for you? Take this cool BuzzFeed quiz to learn more!